The Moody sisters aim to compete and train at the highest levels so it should come as no surprise that one thing they are both passionate about is helping others to realise their own potential.

For both Hannah and Becky an important part of their busy schedule is their own training and development and they owe much to many people, especially David Hunt who they have been training with since 2002.

Having 2 older sisters to keep up with undoubtedly played a huge part in driving Becky’s competitive nature in her younger years. Becky’s time in Pony Club saw her qualify and compete at the national championships for ten consecutive years on five different ponies, achieving her first qualification at just 9 years old.

She began training with Ian Woodhead when she was 13 and the following year was the winner of the Pony Talent Spotting final and reserve for the European Pony Team. All this meant skiving off school and wonderful letters of excuse were composed – to no avail – teachers were fully aware of the situation and either approved or considered her to be wasting her academic skills ‘on horses’.

A year later Becky won her place on the Junior European Team after winning the individual and team tests at Hickstead International with Hannah’s 15hh Highland x Thoroughbred, Sir Fred. She then went on to represent Great Britain at four U21 European Championships with Jordas and Kwadraat winning two team bronze medals. In 2000 and 2001, Becky was the highest placed Brit.

In 2002 Becky began training with David Hunt who has been an incredible equestrian coach and mentor to Becky.

Becky has achieved 4 international wins, won 18 national championship titles and represented Great Britian on the Nations Cup team. Since 2013, Becky has scored over 80% eighteen times in competition with an incredible 88% posted on Carinsio in 2014. In 2019 Becky was selected for the Podium Potential World Class Squad.

A typical week for Becky is spent training her horses as well as coaching other riders at home in Sheffield, or at one of her regular clinic venues across England. In 2020 Becky was awarded the Northern Region Coach of the Year.

Outside of the usual working week, Becky enjoys catching up with family and friends and she has a collection of audiobooks that would put the book collections of some public libraries to shame!

Hannah holds her UKCC Level 3, is a British Dressage Coach Educator, UKCC Assessor and is also on the BD Youth Committee.

Hannah started riding in Brazil when she was 5 years old. Her interest in dressage was sparked by Sir Fred, her 15hh Highland x Thoroughbred. Hannah and Sir Fred had many successes up to and during her time at university in London. Hannah has a first class degree in Fine Art and is the (modest) artist behind the huge canvases in the indoor school at Moody Dressage.

While still at university, Hannah coached the Rockwood Pony Club dressage group (the money she earned from the lessons was subsequently all spent on the train fare to/from London). Their senior team went on to Pony Club Championships 5 times with guidance from Hannah.

Hannah’s popularity grew quickly as a coach in the area and despite the years invested in her degree, she decided to be a pennyless horse person rather than a pennyless artist!

Hannah’s coaching style is clear and fun, while empowering anyone who trains with her to have confidence in their own skills when she isn’t there to help. This adaptable coaching approach has helped riders of all ages develop their own long-term resilience in dressage and eventing on their way to national success.

Hannah was involved with Northern BYRDS from 2001 to 2010 and since 2008 has been on the BD Youth Committee.

A typical working week for Hannah is spent training her horses at home as well as travelling across the UK for her clinics from Aberdeen to the Midlands, and anywhere between! On a rare day off, Hannah loves to spend time with her daughter Eva and her husband Robin. 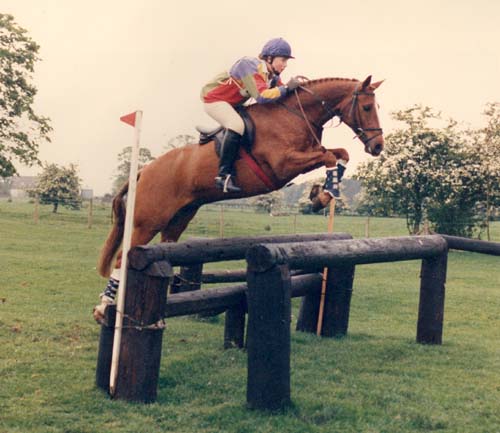